The second instalment of Malkop Summer Rock Festival is just around the corner. The line-up is looking especially groovy this year with Francois Van Coke, Albert Frost, Spoegwolf, Mr Cat & the Jackal, Koos Kombuis, TWEE, The Young Folks, Tom James (UK), Ben Dey & the Concrete Lions and more performing. We’re teaming up with the Malkop Summer Rock Festival team to give one SAMS reader the chance to win a set of double tickets. Just comment below with your favourite act on the lineup and you will stand a chance to win.

The full line-up and festival details can be found here. The contest closes on 22 November. 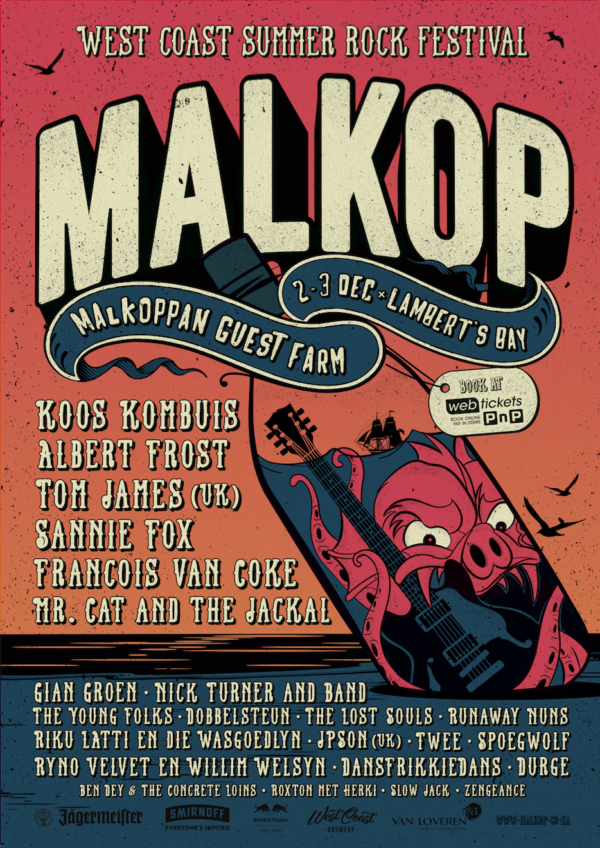 Cape Town’s finest rock n roll musicians gather on one night to pay Homme-age to one of rock n roll’s finest outfits in a first of it’s kind, Queens Of The Stone Age Tribute show.

Now you might be wondering why the hell there’s a tribute to a band that are all alive, kicking and gigging… Well, to be honest, we’re on the tip of Africa with one of the worst currencies, our real alternative music festival looks to have kicked the bucket and a lack of support to rock ‘n roll. So, that’s why… To start off the hype for one of the best rock bands we’ve teamed up with the tribute musos to give you the chance to win tickets.

END_OF_DOCUMENT_TOKEN_TO_BE_REPLACED

Mr Cat & the Jackal are know for their intricate music and weird instruments, today they show you how to build your very own lapslide guitar from a skateboard deck. They call it a Boardslide.

END_OF_DOCUMENT_TOKEN_TO_BE_REPLACED

In June / July 2014 Mr Cat & The Jackal’s equipment tragically got stolen in Woodstock, guess what…. They have found their Telecaster en Hughs & Ketner amp on a gumtree ad!

END_OF_DOCUMENT_TOKEN_TO_BE_REPLACED

With the promise of hot dogs, drink specials and a free entrance, I figured that a We Set Sail gig would be a great way to round off our public holiday.  After a chilly bike ride, the warm and merry atmosphere of Aces’n’Spades in Hout Street was very inviting.

I would describe Aces as a rock’n’roll tavern fully equipped with a boar head mounted above the bar, upholstered pleather walls and beautiful stained glass windows. Their food menu offers gourmet hot dogs and generous side dishes at very reasonable prices. Add a craft beer to that and your evening is already half way to perfect. END_OF_DOCUMENT_TOKEN_TO_BE_REPLACED

Let’s take a look at the South-African music festival calendar: at the beginning of the year there are a few weekend festivals, and suddenly nothing, nada, zilch; zero excitement for many months. Then out of the blue the very first Utopia Music Festival made an appearance, and it seemed like a heavenly oasis in the dry months of no festivals. The renowned festival venue Nekkies, close to Worcester and Rawsonville, played host to the inaugural event. This was a weekend that we’d been looking forward to for weeks. On Friday when the time came to hit the road, we could barely contain our excitement. Sing-a-longs in the car made the route shorter and before we could say ‘Utopia’, we were in front of the fest’s gate.   END_OF_DOCUMENT_TOKEN_TO_BE_REPLACED

The world of PR is tough, competitive and immense hard work. It is not for the faint hearted, especially when you have such a long list of artists you represent. Rachelle Crous’ impressive list of artists includes the likes of The Plastics, Haezer, ISO, Lark, Mr.Cat & The Jackal to name a few.

She’s leaving her mark in the industry and does so with substantial backing. Combined with her intense passion for the music industry, ruthless ambition to offer her artists the best and always staying grounded to her roots, Rachelle Crous in one explosive PR package. She doesn’t seem to show any signs of slowing down either. In this interview, we get to take a peek into the life of Rachelle Crous. END_OF_DOCUMENT_TOKEN_TO_BE_REPLACED