Home REVIEWS ALBUMS ALBUM REVIEW: The Pretty Reckless – Who You Selling For

There’s no one here to break this fall.

From its first moments, its first lyrics, the record has you in its grasp. Taylor Momsen takes charge with a declamatory significance that calls out to you and forces you to listen because she sounds comfortable, confident. She’s not yelling, just speaking. But, you’ve got to listen because what she’s giving you is new. So fucking new.

After 3 years of shifting gears, considering their footing and coming to terms with the fame that many didn’t expect would take hold. After the teen rock beauty that was Light Me Up and the obvious musical maturation from that which was Going to Hell, The Pretty Reckless takes us on their third journey – Who You Selling For – and it’s a road trip with Momsen at the wheel, Phillips in the passenger seat and me in the back with the Damon and Perkins that proves the entire thesis of this review – The Pretty Reckless is a Punk band. I mean, what gets more punk that a record like this? A record produced by a band that’s taken the shit they have for daring to exist.

The first track “The Walls are Closing In/Hangman” calls out to the listener in a relational mode, asking them to take charge:

“When they come to hang you.

When they come to hang you,

And you think you’ve lost control.

This is the most authoritative the band has ever sounded. Delivering a genre-meshing sound reminiscent of The Kills but with the edge of any respectable rock ‘n roll band from the 70’s.  TPR proves that they’ve learnt a thing or two from their time in the industry. This is a band that has had to fight hard for respect. I mean, for a while there, it really did seem like no one was taking them seriously. From the writers at Variety who dug into their first album, to internet commentators who proffered the infamous “The Pretty Reckless is famous cuz boobs” catchphrase – the band has always had to fight against the current – making them inherently punk by the mere fact that they stayed together.

The fight didn’t get them down, though, and if it did, it didn’t for long. Because there’s a power that pervades this album. But, it’s not showboating – it’s defiance. With this record, they prove that they’ve got the goods to back up their stubbornness. They’ve matured their early recklessness into something great – and can sustain it.

The album moves on to “Oh My God” with a speeding guitar and simple and repeated melodic idea which sits quite well as a second track. The energy is picked up and Momsen more than proves her vocal chops as she launches into a fierce examination of self. There’s an anger that pervades the track – a might – and yet the track discusses her insecurities, her doubts:

“I am a victim of my own self-worth!”  she screams with the unashamed honesty that she finds her strength in.

This track – as simple as one from the early days of punk rock – doesn’t offer much in terms of melodic variation. But, that’s precisely the point. Because the song is about craving youth, a certain vitality and youthful ignorance, a simplicity she feels she’s lost. She wishes she was caught in the rye – delivering in a single track what it took J.D. Salinger an entire novel to do.

By this point, the main theme of the album has already been made apparent – a narrative about how the band now relates to their artistic paradigm. How do they preserve themselves – their ideology – while succumbing to success? Can they achieve fame and stay true to themselves? Whatever the answer, the third track on the record – and the album’s lead single – “Take Me Down” proves how much they want it. Juxtaposing the former track with a Bluesy calmness and choral backup vocals to boot, the track moves through the controlled process of telling the story of an artist making a deal with the Devil – the record’s extended metaphor for the modern music industry.

“Sign with the Devil!” – she sings. She’s accepting fame and the battles it’ll bring along with it.

“Prisoner” begins with the soundscape of a chain gang moving along a road – keeping the album ethereal, Southern feel in vogue. The song is instantly minimalistic – giving the listener hope that it’ll be led by the voice. A craving which is sated when Momsen dives in:

“I’m a prisoner! Won’t you please set me free!

There’s a separation of mind and body here. Momsen declares that her ideology will persist long after her body goes to ruin. A confidence which is necessary because the next track “Wild City” drops a character right into the middle of a ruthless NYC which could defeat her if she let it:

“The city ain’t no place for a lonely girl.”, she warns.

But, by this point, I’m not worried because Momsen has proven that she can keep her shit together. The album has, so far, proven that they’re stronger than ever; harmonically gifted, vocally megalithic and punk beyond the shadow of a doubt.

The record’s first half then ends with “Back to the River” featuring Warren Haynes of Gov’t Mule/The Allman Brothers Band fame – she gets back to basics with a comfortable blues that leads into the album’s title track and begins the second half of a record with a conscious divide. 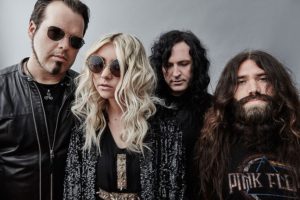 “In the middle of a dream.

In the darkest night.

Woke up with a scream.

Who you selling for tonight?”

This is the most delicate moment of the album. Instead of going large, and delivering blaring vocals which the lyrics could accommodate, she goes quiet for a moment and delivers some of the best moments and one of the best tracks of the album. She sings about her idols – “John was a walrus” – she silently and internally, innocently with that childlike quality she so craved in “Oh My God” assures the listener that she won’t let go of her ambitions – no matter how much it scares her – and I’m inclined to believe her.

“Bedroom Window” follows and it’s also a mellow affair. She achieves a kind of stasis. The speaker is alone in her sanctuary, looking out with a disillusioned gaze – there’s a contract between that space and the “chaos” outside. On this track, she’s retreated from the exposed space she’s been in thus far. It’s the first time she’s isolated and can look back calmly and thoughtfully rather than feeling buffeted by the forces of the outside world. She’s realized the reality of the world she fantasised about – it’s different, more frightening than she expected.

Then she heads back out again, she’s conceded to “Living in the Storm”. She looks at the people around her:

“When I look inside of ‘em, there’s nothing happening.”

But, she feels out of place:

She re-establishes the juxtaposition between the way she feels she needs to achieve her definition of success and the way the industry would have her do it.

[Side-bar: There’s something about this track that’s so reminiscent of Avenged Sevenfold at the top of their game. Though, it achieves something that “The Stage” particularly lacked – the successful use of multiplicitous soundscapes and mixes within the same track. What I feel A7X missed was the motivation for their changes – it felt arbitrary on their last offering. This album – in multiple places – proficiently demonstrates a link between theme and sound. The soundscape changes are motivated and logical – it carries demonstrable weight and contributes so much to the effective consumption of narrative material.]

Moving toward the end of the album, “Already Dead” comes to the fore and carries out its 4-minute run with an undeniable angst. It’s a dreary affair in the best way. Momsen delivers her most painful and emotional vocal moments on this track. She sounds tired – the artist who’s lived through the narrative of this record is burnt out and alone:

“I’m alone up here on this stage.”

Then comes the penultimate track – “The Devil’s Back”. The nostalgia hits again – she addresses herself in a melodic mirror – asking herself to recall a time before she lost her innocence. After having referred to herself as dead for the minutes preceding, here she refers to herself as alive once more. She compares her vital, former self to the one she faces now.

“I hate what I’ve become,

And now I cannot breathe….

I guess the devil’s back. “

She dwells on melancholy self-examinations, and if this had been the end of the album (which it very well could have been) the album would have ended on a particularly nihilistic note.

But, MOTHERFUCKER. It’s not.

The album’s last track leaves you feeling like you may have turned shuffle on by accident and transported yourself to a mistaken dimension – because the genre changes in a second and the record instantly becomes a bastion of defiance – defying even the trend it itself has set.

Momsen and her band refuse to be pinned down. The Pretty Reckless refuses to be pigeonholed. Cuz, dude, they’re punk. They’re free agents. The mainstream, and even the expectations of Alt-Culture “aint got nothing on [them]”.

The final track “Mad Love” sounds more like Lady Gaga on “Wunderland” than anything else I listen to on the regular. It’s not strictly rock ‘n roll –  it’s something else altogether –  but, whatever it is, it makes me happier than I’ve almost ever been about a closing track. By closing off their narrative with this track, The Pretty Reckless proves to their listener that they’ll always be in control of themselves.

Cuz, who are they selling for?

They’re here to be artists – musicians – free of pretence and capitalist constraints. The Pretty Reckless are relentlessly Punk. And they’ll stay that way till they decide not to be. But, it’ll always be their decision – and screw anyone who doesn’t get it.

Listen to the album’s lead single “Take Me Down” and its opening track “The Walls Are Closing In/Hangman” below:

ALBUM REVIEW: Distance And Divide – Searching In The Dark