Saints PMF have been on my radar for a while because they’re doing things differently and they’re getting results – I chased them up to find out exactly who these guys are! Watch their interview below.

Please introduce yourselves to us

I go by the name of K-Tall and we are Saints PMF.  This is QBY, C EL and our manager BC Nason.

We started as friends. We went to the same primary school, lived on the same street. We just grew up together, started listening to music together and playing together. But officially as a group, we started in 2010 – we started recording our first track, which was “Saints at war”.

And we came up with the name Saints PMF.

Where did the name Saints PMF come from?

We were watching a movie called The Boondock Saints. We were inspired by how these guys operate and we saw ourselves in them. We thought we could take that and change it somehow – maybe explain what we say in our music. Those guys do bad things for the right reasons – bad in the name of good.

It’s like they are holy guys, the name of God and God comes to them while they are asleep and then talks to them and like “go to somebody’s house or to this person who does bad things and correct that”. So, the only way to correct that is they kill you. So, we didn’t take it as killing and stuff. Coming from the streets of KwaMashu, we are what we have made of our community. We want to correct every little itch that’s bad there – not necessarily doing bad things, but just doing the right thing which is, through our music, inspiring young people. Teaching & preaching.

We go to communities to help. We don’t have the money, so the only way we can help is when they are hosting events. We go, we perform, and we participate in whatever way we can. Basically, that’s how we formed ourselves.

Where did the PMF in your name come from?

The PMF came first actually – originally we were THOSE guys. We were loud and everybody knew about us on the streets. We were the cheerful guys and we kind of had the idea that we were popular in our area. So, we said we were the “Popular Mother F….”. Then we corrected that. We can’t promote that sort of stuff. We had to come up with a formal meaning – Predominant Masters Fam.

How would you describe yourselves and your music?

The thing that makes us how we are is the passion. WE are self-taught.  We come from different backgrounds. I come from a cultural background – a very traditional background.

BC Nasin – Band Manager “The music that the guys are doing now is very authentic. Their music is original. They’re not copying anyone. We are going to go to the hip-hop genre. We going to take a big portion of it by doing something totally different that’s going to allow someone who’s not mostly hip hop to be introduced into this sort of lifestyle, this sort of music and this sort of understanding. So, that’s where we are right now and what we are going to be pushing.

Tell us about Diba Dance?

Song of the year! My friend who’s also a dancer was like “no man” you can’t be doing what everyone’s doing – the nae nae and stuff. We have two authentic dances of our own – the Diba Dance and other one is Ndukuzempi We are very traditional. So, the Diba Dance, we just did it. It’s not much of what we came up with. It’s just a Diba Dance like Nelson Madiba did it. We just putting a dance into our  hip-hop style.

You said you are very traditional. Do you have any explicit lyrics in your music?

So what exactly is it that makes you different?  Because you ARE different.

Firstly, we come from a different background. C EL is a Sotho tribe, I’m a Zulu and BC NASON is a “Zulu”. I’m traditional – core to the very core. We were in dance groups and said “Let’s do something inclusive”. We don’t want to be those single guys who just go on stage and do what everybody does i.e. rap, rap and rap and come off. Everybody knows that. Why don’t we go to our real selves, put that together and make it one?  Dance while we’re rapping and let’s not do what everybody does when we dancing too. We come from the kwaito style. Now we escalated to Hip Hop. So, let’s put all that together – kwaito, hip hop, put in our music and talk about and rap about what we are doing and try bring that personality and background in each one of us.

So yesterday, after 7 years together, you appointed a manager?

Things are getting serious now.  We need someone to back us up. We can’t be doing music and doing papers too. We can’t be handling bookings and interviews and at the same time we need to rehearse, come up with concepts and make music. We need someone to do that for us while we focus on our music. That’s what took us this long to be able to be this proper. We were doing many things at once. I’d go out and ask for performances and I’d still have to go to the studio. We have dancers we have to manage as well. So it’s become a lot of work.

BC Nason – Band Manager – I’ve known these guys for about 6 years now. I’ve seen them work,  I’ve seen them record. I know the type of music they are doing. As of late, I’ve been working on putting things into place. I was working before, I had a full-time job. I resigned because I wanted to be self- employed and I was just looking for something I could work with, take a bite of it, something I could take and run with – make a business of it and make it a success. I’ve done lots of management duties before in various companies, but I’ve never worked with a business like this. It’s pretty much a start-up. They’ve done the groundwork, they’ve got the music, they’ve got their sound. Now it’s just about taking this and turning it to commercial and obviously so that these guys can earn a living and carry on doing what they want to do, which is their passion. My job is just to come in be a middle man and get them to the place they can’t go.

Are you only with working with Saints PMF? What if somebody watching this also wants to work with you?

BC Nason – Band Manager.  Currently, I’m only working with Saints PMF. I was looking for them and apparently they were looking for me as well. We bumped into each other on the road and I said “hey guys I want to be part of this song” and they said,” oh we’ve been looking for you; we want you to be part of the song”. And so our working relationship began.

That’s Saints PMF. Like with you, I didn’t put much effort to get into contact with you.

Yes I chased You

There’s this energy around you 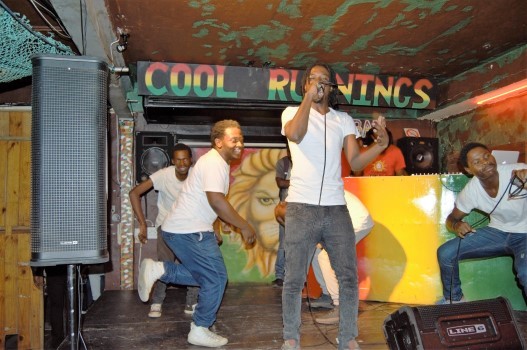 What’s your advice to other up and coming artists?

Firstly, you need to have inspiration. There are people we look up to people who are not even in the music business, but they understand life and understand being a person, being a good person. They can give advice – life advice. Not just musical advice. So, we have those kinds of people. You need to have that kind of person. That person that whenever things don’t work, you can just go back to that person.

You need to have a musical inspiration – not necessarily someone you know in person. For me personally, someone who inspires me is KRS One. When I first started out, I was sounding more like KRS One and Common. But then I was like, ok cool, let me be me, but be inspired by them. So that’s what the guys need to do. Don’t look up to an artist and then try to be like him. Look up to an artist, take the work ethics, find videos of him in his studio, videos of him negotiating and try to use that, being YOU. Bring the You out of everything that you are inspired by.

Don’t do what everybody does. Come on. Be original. Be authentic. Right now everybody’s trying to sound like Drake or Young Duck and everybody wants to be them. Tap into yourself. Tap into your soul. What do you want to be? What do you want to be remembered by? You don’t want to be remembered as that guy that sounded like Drake. I can think of a couple of guys who sounds like other guys (commercially). But that I won’t say (laugh). It’s fine. They do make money and they do go commercial. But, at the end of the day, it’s going to catch up with them. You are going to run out of concepts.                 You are going to run out of creativity. Let’s just say KRS One dies and every time I need to record a song I need to see what KRS One does. If he’s dead and he’s no longer recording music, what am I going to do?

BC Nason – Band Manager. You need to understand that in anything in life, if it’s worth achieving, it’s worth taking the time to achieve it, mastering the skills necessary for you to be able to achieve that. So for the guys to be together for so long and have worked this hard at their product and their brand, everyone who wants to do the same, should know that it’s not a sprint, it’s a marathon. Take your time, learn your skill, define yourself and know who you are as an artist. Then you take your things outside and get people to buy into what you doing.

We’ve turned down many people who wanted to work with us because what they wanted is not what we are. One reason why I personally didn’t want to work with other guys is – don’t tell me what I need to do. Don’t tell me about MY music and what’s in my heart. It’s only me who knows what I feel.

What’s so magic about this (Saints PMF) is that QB can say one word, and I will know what he wanted to say. I can say one word and he can finish it for me. We are just THAT connected. Our manager let us be, he let us be us.  I think that’s what record labels try to do when they sign you. They always trying to change you, do what’s in the market, what sells.

Before I let you go, please do the Diba Dance for us.

Saints PMF are a young Hip Hop Trio from KwaMashu in KZN who are inspired by the genres of Maskandi, Diakgela (Sesotho traditional music), Neo-soul, Jazz , Scathamiya, Kwaito, Deep House and Hip Hop.