Norma Jean has been at the pinnacle of constant reinvention within the metalcore genre since their inception in 1997. After just under two decades, the band is finally heading to South Africa to perform at Krank’d Up. Their tour is sadly limited to only a stop in Johannesburg, but nevertheless, this is a huge deal for the local metal scene. We caught up with Cory Brandan Putman, the band’s vocalist, guitarist, and chief songwriter, ahead of this tour. We spoke about their desire to play in South Africa, creating something new with each album and had a brief discussion regarding why music is more important than promo photos.

You shall be making your South African debut at Krank’d Up very soon. Has performing in South Africa been something you’ve wanted to do for a while?

Absolutely! One of the things you don’t necessarily think about when you’re a kid dreaming of being in a band someday is that you have to travel a lot. It’s not something I necessarily wanted to do, but it comes with the territory and it’s something I’ve really embraced over the years. I have always wanted to visit South Africa whether it was to play or not. Playing makes it even cooler.

Your previous albums have been incredibly strong in terms of lyrics and the depth of the meaning of the lyrics. It is actually one of the reasons why I love Norma Jean so much – your music has a powerful lyrical quality to it that is missing from many metal bands. What influences do you reign in while writing lyrics and how do you go about ensuring they remain rich with meaning?

It’s important to me to write about things I experience personally and then turn them into something that can be interpreted in many ways. Paint a broader picture. Everyone is different. To me, it’s like if you and I were to look at the same work of art, you might see something different in it than me. I like that people can interpret lyrics in different ways and I like classic themes. I want to create something that has lasting meaning. Rather than a current event that will be gone and forgotten when the tide changes. The English language is amazing in that there are so many words that can mean so many things. Like anyone can probably relate to saying “I’m not mad, I’m frustrated” or something like that. You can really dive in and find the exact word that pinpoints an emotion correctly. I spend a long time making sure that comes across in every song.

Having an extensive discography can often pose problems with regards to remaining unique and fresh as many bands often get lulled into reproducing the same sound that brought them success. How do you guys ensure that each album comes out differently and is it difficult to do that?

We make ourselves do it! I literally force us to change with each record and grow. I think it’s really easy to create the same thing over and over and I’ve seen bands get really bored doing it. Norma Jean kind of uses a “sour mash” technique. We take what we’ve learned and add onto it or experiment with something else completely and throw it into the mix. The way we write, or the recipe, is always changing. We believe as musicians we are never above reproach within the group, there is always something more to learn, always more room to grow!

Previous interviews have mentioned that the songwriting process is a bit of a collaborative process for Norma Jean. Does this statement still ring true for that the new album?

Yeah for sure. We have an anything goes kind of mentality. We believe in letting our ears make all the decisions. I’ve been in bands that do a lot of talking. You’ll hear an idea come out and then someone else says “oh or what if we did this.” You just skipped and idea right there. Try them both. Play it out and see what your ears think. Your brain will make technical or logical decisions. We always say that the songs write themselves and we are just the tools to make it happen. Try it out!

The team of people is the main reason for sure. They made us the offer we were looking for but at the end of the day, we liked the people working there. Great people, hard workers, that love music and are passionate about what we do. Just a great place to be putting out solid music across the board. I would recommend everyone check out all the releases this year.

There is a sentiment in many music circles that a band should change their name if they no longer have any of their original members. Is this something you as a band has struggled with considering that there are no original members in the band? What are your thoughts on that sentiment?

Not at all. Norma Jean is a collective of musicians where the association is flexible and creative direction is shared across a history of friends and family. We have never been the kind of “band” where a group of faces represent the music like a boy band or something. I feel like that was an idea made up by a label years ago to market a star rather than focus on the music. To us, you like the music or you don’t. Also, gimme a break people, I’ve been on six out of 7 records so I’m an original member now.

Let’s actually talk about that. When most of the original members left – did you feel like you’d inherited a band for which many have incredibly high expectations and was there ever a point where you felt like you would be unable to meet those expectations?

I joined the band in 2004 and immediately started writing songs. I think a thing people might not know is that I write, front to back, 80% or more of the songs since I joined and we started writing O’ God The Aftermath, my first record. After that, I’d say refer to the answer before this one. The music is more important than the promo photos. 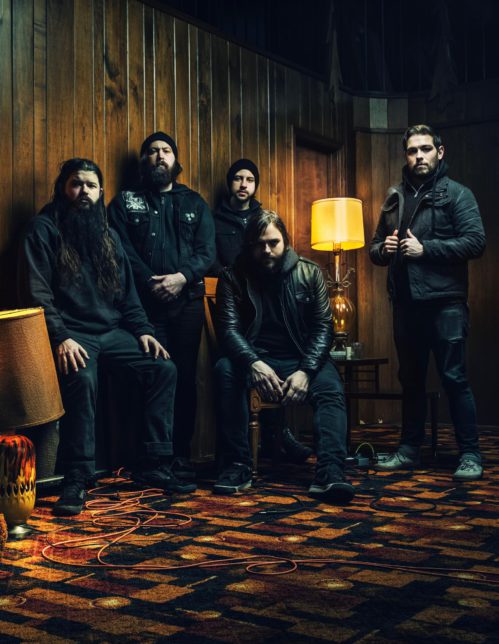 Norma Jean are described by many as being a Christian band which I suppose can be true of those songs which are based on Christian themes, but is it annoying to have people exclusively define the band by that particular label. Actually, what are your thoughts on the extensive usage of the label of “Christian music” or “Christian metal” to describe bands with Christian members?

I am a follower of Christ so it definitely isn’t annoying to me. I can’t speak for every member of my band, just as no one can speak for anyone but themselves. Beyond that, we are music lovers and create sound. Sound can’t have a belief. Some of the songs I write have my faith in God as a cornerstone, but by that sense, we are just like every other band. We sing about what we believe in.